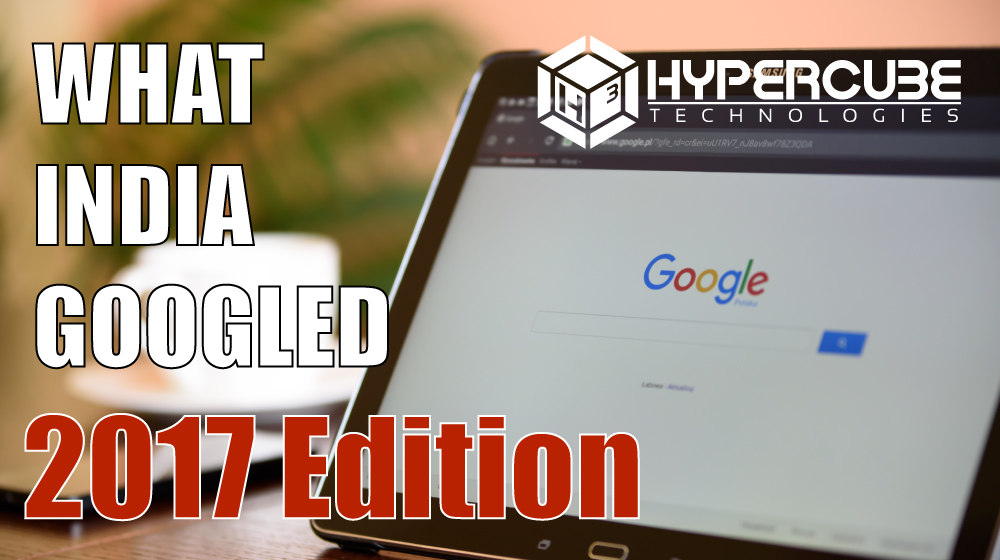 As another year comes to a close, we here at Hypercube Technologies look back on what has piqued the interest and curiosity of the nation in the past 12 months. The year 2017 was as eventful as any other, but the majority of us, in the online realm, were searching for some very specific things (other than the perpetual search for the meaning of life and the best restaurants/café’s and bars
near us). Here are the top 5 things that India searched for on Google.

S.S.Rajamouli’s mythological action-drama film Baahubali hit the theatres in July 2015. The film broke all records, being translated in almost all foreign languages and gained unprecedented success, not only as a Telegu and Tamil film, but a film from India. The film ended with a cliffhanger and had the entire world waiting for its conclusion, which announced its release in 2017, and from the start of the year the question “Kattappa ne Baahubali ko kyun mara?” had engulfed Indian audiences so much so that it is the most googled thing of 2017.

The Indian Premier League is to cricket lovers all around the world what the European Football Leagues is to football/soccer lovers. Being the second-most searched thing on google for 2017, certainly establishes that fact for India.

Unsurprisingly, the third most searched thing on google is Live Cricket Scores. As if there’s any doubt of India’s love for cricket.

When he’s not busy trying to create massive social and practical reforms in India either through actual altruistic work with legs on the field or on the popular TV show, Satyamev Jayate, Aamir Khan is making some awesome cinema. Almost always it has some drastic change in his appearance that we’ve noticed since Ghajini. Releasing only one film a year, his film Dangal was the fourth most googled thing of 2017.

You can hate or love him, but you can’t ignore him (doesn’t seem like India tried to either). Chetan Bhagat’s book Half Girlfriend was his third to be adapted for the big screen, and being in the top 5 overall google searches of 2017 there’s no doubt there’s a market for his books.

The country has undergone some sweeping changes in the past two-years in terms of policy implementation and some structural changes as well. One of them is linking of Aadhar with your Pan Card (in order to catch hold of those avoiding tax). While the objective behind this move was welcome, the inconvenience that the citizens faced wasn’t welcomed as warmly.

Just when people and other telecom Giants thought JIO wouldn’t embark in any other crazy generous schemes, Mukesh Ambani went ahead and launched the new offer of giving out free handsets with every purchase of a JIO simcard. While Vodafone and Airtel were busy pulling their hair from their heads, India searched for How to.. book a Jio Phone.

The craze of cryptocurrency, Bitcoin is persistent and India is searching for ways to get their hands of some of this digital moolah. While there seems to be a lot of different opinions on its future, one thing is for sure, India certainly is interested in investing in Bitcoin.

Well for some reason, a lot of us really wanted to take screenshots in 2017, but didn’t know how to.. thus Google.

Gabbar Singh might have only been interested in knowing “Holi kab hai?” and surely Samba would have definitely told him. But even Samba doesn’t know how to remove the Holi Colour from your face (surely Gabbar is one of the people who searched for this).

From learning “How to…”, to learning “What is…”, quite a curious bunch we are…

The Goods and Services Tax Act, 2016 was the 122nd Amendment bill in India’s Constitution. It was introduced in practice from July 1, 2017. This bill unified the countless taxes that previously existed into a standardized tax, which would make it more favorable for all the government, those providing goods or services and the customers. While this move is internationally lauded, people in India are still on the way to getting used to it.

Well, Bitcoin is a cryptocurrency that is a medium of exchange that is not regulated by any financial institution and hence there’s no chance of their being any mismanagement of funds… or… well… you know this is complicated to explain, better just google it.

In ancient times, the sport was described as Yeru thazhuvuthal, which means embracing the bull. Jallikattu comes from salli or jalli (coins) and kattu (bag). It refers to a bag of coins, which was tied to the bull’s horns, and the winner had to retrieve. Running into huge controversies, Jallikattu was moved to be banned by animal rights group PETA (People for the Ethical Treatment of Animals), as they saw it as animal cruelty.

After the news of the Government Banning BS3 Vehicles from being manufactured in India, the people started searching for what that meant. What it meant was cars with Bharat Stage III (which is a standard set by the central pollution control board) for those cars that have emit a certain amount of air pollutants from its internal combustion engine. In 2017, the government banned
any more production of such vehicles and asked the companies to only produce BS4 and higher models, in order to curb polluting the atmosphere.

It was an interesting journey for Hypercube Technologies to learn what India was curious about in 2017. An eventful year giving way to 2018, which will certainly have its own interesting events, gadgets and people that we would Google.

So from the team here at Hypercube Technologies, we wish you a Happy New Year. Please be sure to like our page and share this article if you’ve liked it or tell us whether you liked it or not.